Ned Kelly and the  Kelly Gang were Australian outlaws who became famous for their bullet proof armoured suits. During their criminal career, Ned and his gang were responsible for a number of crimes, including the ambushed shooting of three policemen. And later the execution style killing of a close friend turned traitor.

Successful in carrying out several bank robberies, the gang members were fugitives for nearly two years, until an unplanned siege developed at a country Victorian inn. During the siege, and while wearing his suit of armour, Ned made his famous and extraordinary "Last Stand". The Kelly Gang had engaged the Victorian Police in a futile gunfight until all the members, except for Ned, were killed. And despite Ned's serious gunshot wounds and blood loss, he continued to assist his gang including the hostages still trapped inside the inn.

As the only surviving gang member, he was tried and hanged for his crimes. Ned's last words before they pulled down a white hood over his face were "Such is Life".

The above photographs are the most popular portrait versions of the Kelly Gang known to the public. And these same images are my inspiration for my paintings of each member.

Painted portrait of the Kelly Gang

Because there are no known colour portraits of the individual gang members, I decided to compose oil paintings depicting each member in full colour.

With some research I was able to find out their hair and eye colour, facial features such as Ned's hooked nose and their skin tones. Plus with existing black and white photographs of each member, I had enough material to create what I believe to be accurate representations of each Kelly Gang member.

I am now offering for sale, prints and merchandise of Ned Kelly memorabilia. Some prints will also come with signed certificates of authenticity, and should you require a framed picture, the prices will be very competitive.

My latest creations for sale

The new Ned Kelly website with a variety of Kelly merchandise from T-shirts to posters is now available for sale online. 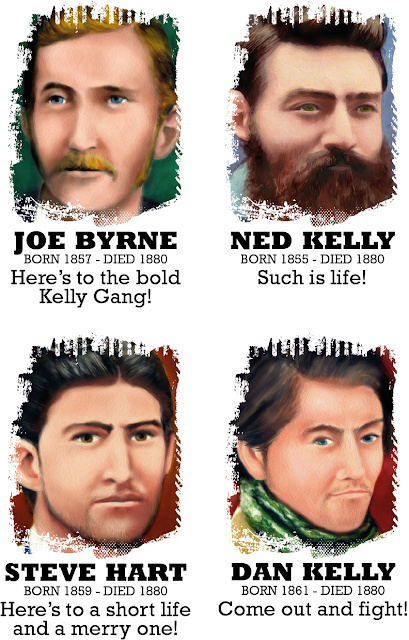